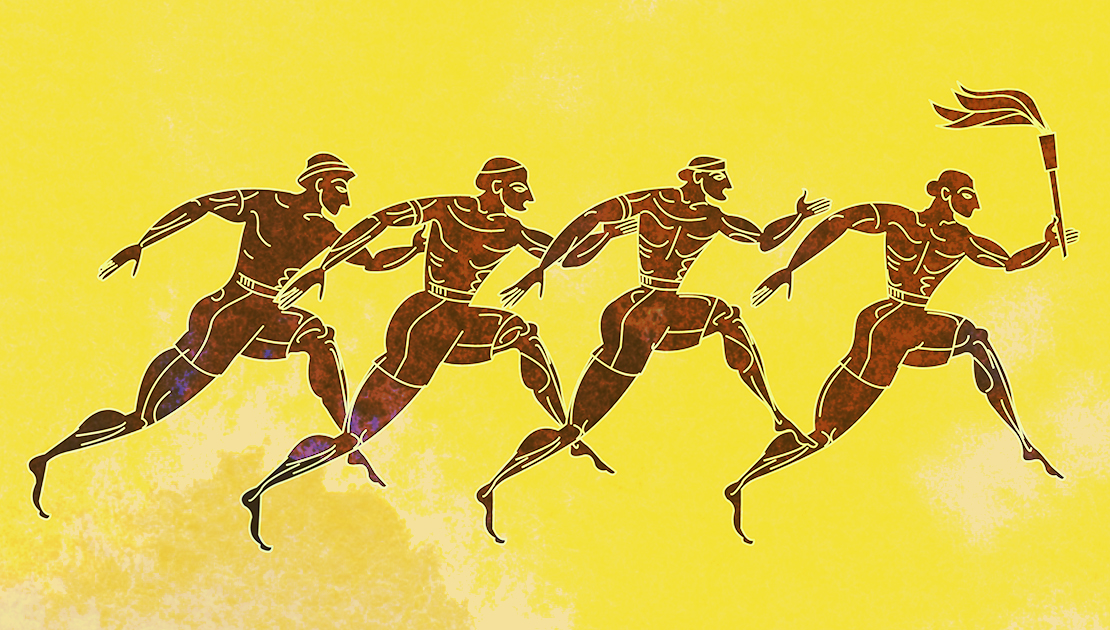 One of Four Great Athletic Festivals

I cannot, just by telling you about it, convince you of the pleasure of what happens at such a festival as well as you would learn for yourself, sitting in the middle of the crowd, watching the arete of men and physical beauty, amazing conditioning and great skill and irresistible force and daring and pride and unbeatable determination and indescribable passion for victory. I know that you would not stop praising and cheering and applauding.
~ FT Lucian, Anarcharis 12

We’ve come to know one major athletic festival from ancient Greece – the festival at Olympia or the Olympic Games. The modern name of the games itself connotes a connection with the one set of games. In reality there were four major athletic festivals in ancient Greece. Participants came from all the Greek city-states (polis) across the Mediterranean Sea, making the contests truly Panhellenic – ‘all Greek.’

These four games were actually a cycle of athletic festivals known as the Panhellenic Crown Games. Crown Games were understood in Greek as agôn stephanitês: agôn – game or competition (more on this important topic in another article) and stephanitês – from the Greek word for crown, stephanos. The victory crowns were the primary prizes awarded upon victory but there were many secondary prizes such as money, amphoras filled with olive oil and shields.

These games were held at Olympia, Delphi, Isthmia and Nemea. The granddaddy of the games, Olympia, was not only the preeminent event, which the moderns took the name to use for the 19 th reintroduction of the games, but also the first one. Greeks themselves dated the first games to 776 BC. The games continued for over 1000 years (1,169 years), continually being celebrated even under Roman rule of the Greeks. They finally came to an in AD 393 when the Roman emperor Theodosius I banned what he considered pagan rituals, as Christianity become integrated into the Roman Empire.

The popularity of the games at Olympia led to additional athletic festivals. In 586 BC the city of Delphi (often called the Pythian games, after name of the high priestess of the Temple of Apollo at Delphi) began a program of competitions similar to Olympia. The site of Isthmia became part of the crown cycle in 580 BC. And the Nemea joined the competitive cycle in 573 BC. Olympia, Nemea and Isthmia are all located in the Peloponnesos – the peninsula of southern Greece – while Delphi is in upper central Greece.

Together these four games formed the athletic cycle known as periodos in Greek. The best performers who had won at least one victory in each of these four sites earned the honor to be called periodonikai or circuit winner. The cycle would be completed within an Olympiad of four years but the organization of the games was not straightforward. Here is what a typical cycle would look like using 480 BC as the starting year. (Note: Ancient Greek Athletics, Miller 112)

As you can see from the schedule above, our ancient athletes were quite busy competing in the games. The four year cycle actually included six festivals because the games of Nemea and Isthmia were held every two years. And in two of the years in the cycle – 478 and 476 – there are 2 festivals in each year: April and May and then again in July and August.

The Olympia–Delphi–Isthmia–Nemea periodos maintained it’s prominence in the Greek athletic and social calendar for centuries. As Nigel Spivey writes ‘’even after the Greek city-states had succumbed to conquest, first by the Macedonians and then the Romans, the four festivals continued to attract athletes and pilgrims from a wide area around the Mediterranean basin…” (Note: Spivey, Nigel. The Ancient Olympics (p. 73). Oxford University Press. Kindle Edition.)