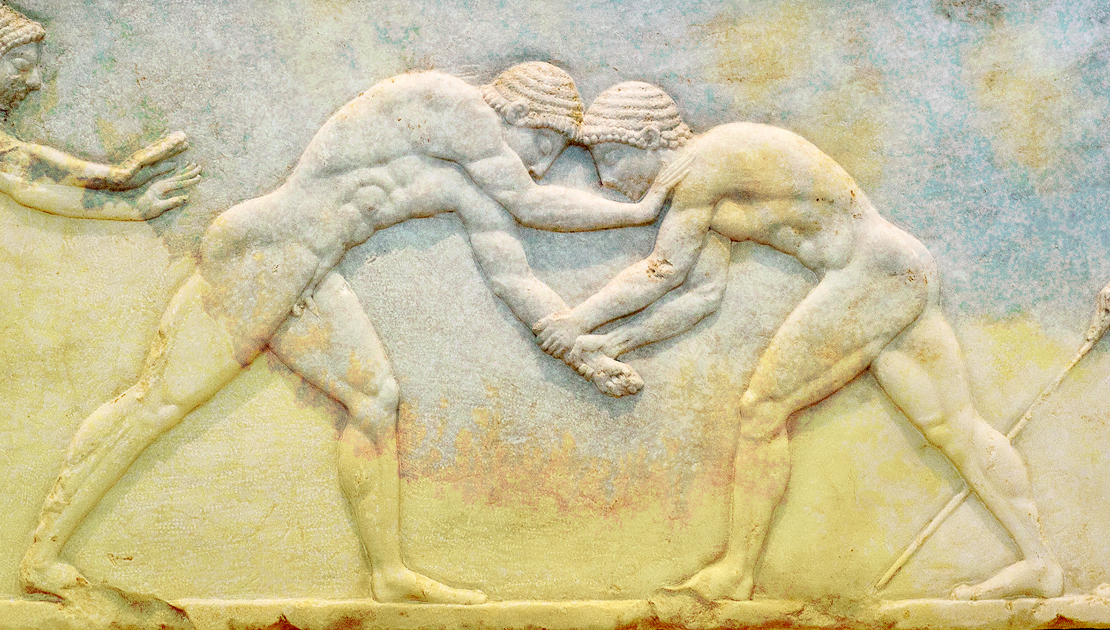 How did a philosopher like Plato – a lover of wisdom – someone who we moderns would consider purely an academic – create a unique, holistic approach to exercise and health?

We will examine the life and background of Plato here to inspire our understanding of a holistic approach to the gymnasium.

Plato’s biggest impact in history was as a philosopher and as we’ve seen above, the founder of the Academy, the first institution of higher learning in the western world. Alfred North Whitehead, an important 20th century philosopher and mathematician, famously wrote this about Plato’s enormous influence:

“The safest general characterization of the European philosophical tradition is that it consists of a series of footnotes to Plato. I do not mean the systematic scheme of thought which scholars have doubtfully extracted from his writings. I allude to the wealth of general ideas scattered through them.” (Note: Process and Reality (Free Press, 1979, p. 39)

Let’s look at the origin story of Plato to get more perspective on his foundation. Some little known but revealing facts about his life, and even the meaning of his name, will help us better understand how Plato came to his philosophy of caring for the body and caring for the soul.

Our main source of Plato’s life is Diogenes Laertius, a third century AD Greek biographer of philosophers. His book, Lives of the Eminent Philosophers, has become the principal surviving source of the history of ancient Greek philosophy.  The text has inspired fascination, inspiration, disagreement and even contempt from artists and scholars.

But if we go back to the Renaissance period, we see writers and artists praise the philosophical biographies of Diogenes. In the Essays of Montaigne he says:

“he wished that instead of just one Diogenes Laertius there had been a dozen: ‘for I am equally curious to know the lives and fortunes of these great instructors of the world as to know the diversity of their doctrines and opinions.’ (Note: Laertius, Diogenes. Lives of the Eminent Philosophers (p. vii). Oxford University Press. Kindle Edition. Sourced from: Montaigne, Essays, bk. II, ch, 10, “Of Books.”

And when the great Renaissance painter Raphael was asked by Pope Julius II to create The School of Athens in 1509, he used Diogenes’ work to inspire his personal portraits.

Perhaps the best way to appreciate the biography of Diogenes’ Plato is through the eyes of Friedrich Nietzsche. The German philosopher “quipped that Diogenes Laertius is the porter who guards the gate leading to the Castle of Ancient Philosophy. Like Montaigne, Nietzsche savored the paradox that this gatekeeper was also a fabulist” (Note: Laertius, Diogenes. Lives of the Eminent Philosophers (pp. vii-viii). Oxford University Press. Kindle Edition.)

But more importantly for us, Diogenes’ biographical work becomes a lens of how one should properly search for wisdom – “through studying lives as well as doctrines” – as Nietzsche strongly urges.

“I for one prefer reading Diogenes Laertius,”…“The only critique of a philosophy that is possible and that proves anything, namely trying to see whether one can live in accordance with it, has never been taught at universities; all that has ever been taught is a critique of words by means of other words.” (Note: Laertius, Diogenes. Lives of the Eminent Philosophers (pp. vii-viii). Oxford University Press. Kindle Edition.)

Before Plato became known as the founder of western philosophy, he was an athlete. We learn from Diogenes’ book two fascinating facts about Plato’s young athletic career: he “studied gymnastics with Ariston the Argive wrestler” and that “he wrestled at the Isthmian games.” (Note: Laertius, Diogenes. Lives of the Eminent Philosophers (p. 135). Oxford University Press. Kindle Edition). This text in a relatively obscure ancient philosophy book belies the significance of Plato’s athletic background. The father of western philosophy trained in his youth as a wrestler and competed in one of the four prominent ancient Greek athletic festivals. That’s akin to a modern-day university level wrestler competing at an international wrestling tournament, if not at the Olympics.

If Plato’s athletic achievement is not impressive enough consider the origin of his name. Plato was actually his nick name. In the same Diogones book we learn that his birth name was Aristocles (named after his grandfather), but his wrestling coach gave him the nickname Plato “because of his robust constitution.” (Note: Laertius, Diogenes. Lives of the Eminent Philosophers (p. 135). Oxford University Press. Kindle Edition).  Plato in Greek is Platon (Πλάτων), which is derived from Greek platys (πλατύς), meaning “broad-shouldered.”

There is no better illustration of Plato’s unique training philosophy of caring for the body and the soul than an unusual sculpture of the world-famous philosopher.  When the archeologist Stephen Miller was finishing his book Ancient Greek Athletics, he was looking for a portrait of Plato to go along one of Aristotle. His final chapter was addressing a point near and dear to our message: it “dealt with athletics as an agent of education and of the development of arete (virtue, excellence, and more).” (Note: Stephen G. Miller. The Berkeley Plato: From Neglected Relic to Ancient Treasure, An Archaeological Detective Story (Kindle Locations 65-66, Kindle Edition.).

There were many portraits of Aristotle but less so of Plato. Professor Miller came across a herm portrait of Plato (a sculpture with a head and torso but with a square, lower shaft/block which serves as the base) in the basement of his university’s gym, Hearst Women’s Gymnasium of the University of California Berkley. Unfortunately, he was told it was a modern fake. What ensued was an archeological detective story that not only proved his critics wrong but more importantly, for our purposes, highlights Plato’s body-mind discipline connecting the world of athletics to the gymnasium-academy.

In his book The Berkeley Plato: From Neglected Relic to Ancient Treasure, An Archaeological Detective Story, Miller explains how we was the right man at the right time to unravel this sculptural mystery of the ‘fake’ portrait herm of Plato. Two pieces of evidence on the sculpture particularly stood out for Miller: 1) Plato wore ribbons, which the archaeology professor knew was typical of the ancient Greek athletic scene and 2) there were inscriptions on Plato’s philosophy of the soul. What was the connection between decorations of athletic victory and insights on the immortality of the soul?

Let’s first look at the inscriptions on the sculpture. There were 3 separate texts. The first one “announces that the portrait is of Plato, the son of Ariston, the Athenian.” The second one is a quote from Plato’s Republic, “Blame belongs to the one who chooses. God is blameless.” Or, in modern vernacular: “Blame the chooser, not God.” The final one is also a quote, this time from Plato’s dialogue Phaedrus: “Every soul is immortal.” Plato expresses this idea in a number of other dialogues as well.  (Note: Miller 171, 178-180).

The display of ribbons on the sculpture is more curious. We already saw that Plato was a competitive wrestler as a youth.  But there is no evidence of Plato being celebrated with a dedicated statue or ode for a specific victory, such as at the athletic festival at Olympia.  The headband with ribbons was considered a reason to discredit the authenticity of the statue.  Ribbons themselves were not restricted to athletic victories, even though they most likely originated in field of athletics.  “Ribbons are also to be found in another athletic context: the palaistra [wrestling school] and gymnasion,” and honoring the leaders of these schools  as “rewards for local competitions or even for exercises well done.” (Note: Miller 455-456 and 471-472).

The athletic connection shouldn’t surprise us. We’ve already seen that Plato loved to use athletic metaphors in his philosophy, often placing his main protagonist Socrates in or near the gymnasium or palaistra. Beyond Socrates, Plato frequently uses athletic competitions to make his point. Miller shows us the specific frequency of their use: “footraces (seven times), pankration (once), pentathlon (once), boxing (six times) and especially wrestling (ten times).”(Note: Miller, 465-467).

It’s in the final section of Plato’s famous work The Republic where the power and impact of his bipartite education of mind (psyche) and body are truly revealed for us. The book comes to an end with Socrates (Plato’s) final words:

If we are guided by me, we shall believe that the soul is immortal and can endure every kind of bad and every kind of good and so we shall always adhere to the upward path and pursue justice with wisdom in every way, so that we will be friends to ourselves and to the gods while we remain here and afterward when we receive our reward, just as the victors in the games do their periagermos and we will fare well both here [on earth] and in that thousand-year journey of which I have told you.  (Republic, 621C-D) (Note: Miller translation, Miller 521-524)

For Miller the meaning of the image is clear: “if we lead the good, the just, the wise life, at the end of the race we will be victorious and go on our final victory lap, our periagermos, to collect our ribbons. This is the beribboned Plato at Berkeley – a portrait of the good, immortal soul; of the virtuous member of society; of the philosopher and of his philosophy.” (Note: Miller, 525-527). Not only does this portrait’s story enrich our understanding of the great Plato’s life, it illustrates what’s possible for our personal growth with an integrated, holistic gymnasium-academy program. We too can take the victor’s lap during our pursuit of excellence by exercising our body and soul.