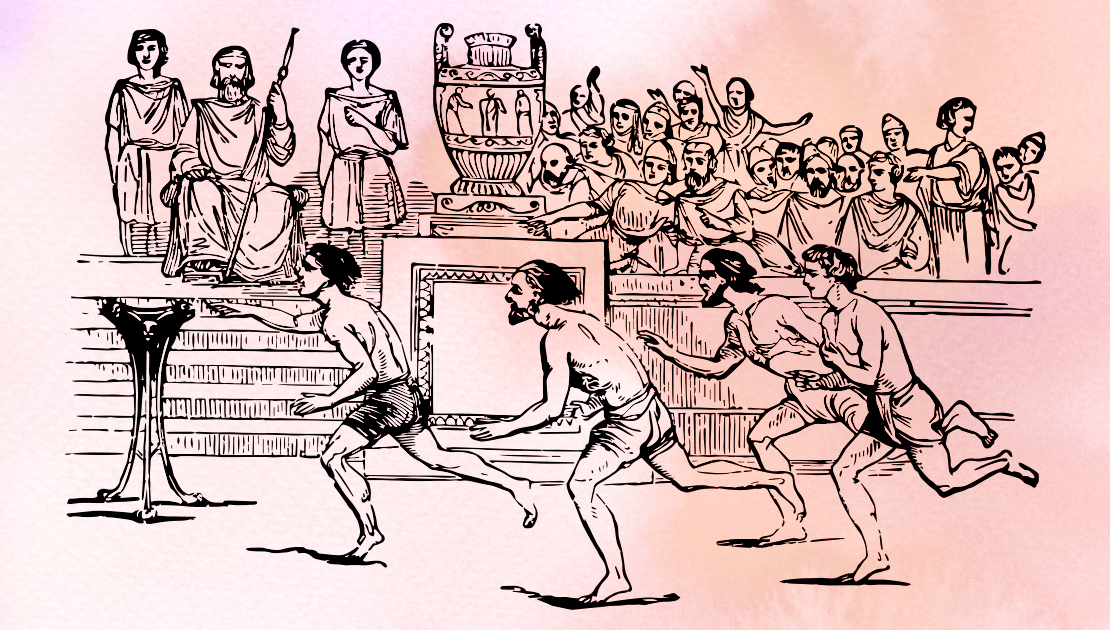 Odysseus Gets Called Out That He’s Not an Athlete

“Stranger, I suppose you must be ignorant of all athletics. I know your type. The captain of a crew of merchant sailors, you roam round at sea and only care about your freight and cargo, keeping close watch on your illgotten gains. You are no athlete.” – Odyssey, 8.159-163, trans. Emily Wilson

The Iliad is a story of the rage of Achilles and numerous battles in the Trojan War. The Odyssey, Homer’s second great epic poem, is different. It is an epic tale of homecoming, survival, and wanderings.   Odysseus is the hero of this tale. Known for his bravery and cunning, Odysseus longs to go home to his kingdom of Ithaka, after 10 years of fighting. And like the Iliad, athletic competition plays a role in revealing the competitive nature of our hero, and has something to say about you and I.

On one of his final adventures before arriving home, Odysseus finds himself in the land the Phaeacians. Disguised, with the help of the goddess Athena, he is welcomed as a guest of the King Alcinous. After a feast, the King calls for games to demonstrate his people’s talents for his guest.

“My lords! We have already satisfied our wish for feasting, and the lyre, the feast’s companion. Now let us go outside and set up contests in every sport, so when our guest goes home he can tell all his friends we are the best at boxing, wrestling, high-jumping, and sprinting.”
– Odyssey, 8.96-104

These are not funeral games, like we’ve seen in the Iliad, or one of the pan Hellenic games like at Olympia. These are contests meant to impress foreigners and guests: “This foreigner – I do not know his name – came wandering from west or east and showed up at my house.” (8.26-28).

The young Phaeacians athletes begin their display with contests of running, wrestling, discuss and boxing. When they were over, Laodamas, King Alcinous’s son said,

“Now my friends, we ought to ask the stranger [Odyssesus] if he plays any sports. His build is strong; his legs and arms and neck are very sturdy, and he is in his prime, though he has been broken by suffering. No pain can shake a man as badly as the sea, however strong he once was.” 8.133-138

Laodamas continues calling to Odysseus: “Nothing can be more glorious for a man, in a whole lifetime, than what he achieves with his hands and feet.” But Odysseus is reserved and avoids the challenge:

“Laodamas, why mock me with this challenge?
My heart is set on sorrow, not on games,
since I have suffered and endured so much
that I now only want to get back home.
I sit here praying to your king and people to grant my wish.”

Another noble youth who competed in the athletic contest, Euryalus, “responded with outright taunting,” calling him out in the opening epigraph, that he was “ignorant of all athletics,” who was only a greedy merchant sailor and “no athlete.’’

Odysseus responds to this taunting as we would expect from our hidden and famous hero:

“What crazy arrogance from you, you stranger!” …You have stirred my heart to anger with those outrageous comments. I am not lacking experience of sports and games. When I was young, I trusted my strong arms and was among the first. Now pain has crushed me. I have endured the agonies of war, and struggled through the dangers of the sea. But you have challenged me and stung my heart. Despite my suffering, I will compete.” (8.167, 178-187)

Odysseus represents all us former athletes of past glory who rise up to the challenge when called out. It’s interesting to note that the section where Odysseus gets challenged that he is “no athlete” is the only time Homer uses the word athlete in his epic poems. Homer is trying to tell us something important here.

At issue is his identity. At first Odysseus tries to keep this a secret and refuse participation. But when he gets challenged, he rises to the occasion. Realizing that words are not enough, he stands up to demonstrate his competitive excellence with deeds. Despite his suffering, he will compete.

And compete he does. Odysseus leaps up ‘’cloak and all, and seized a massive discuss.” His mentor and aid, the goddess Athena, marks the spot. In human disguise she states: “It is far ahead of all the others. You can celebrate! You won this round, and none of them will ever throw further – or as far!” (8. 195-198).  Now Odysseus is on a roll:

The local hosts are silent and give up trying to best Odysseus. They acknowledge they can’t hang with our homeward-bound hero.

“We are not brilliant at wrestling or boxing, but we are quick at sprinting and with ships we are the best. We love the feast, the lyre, dancing and varied clothes, hot baths and bed.” (8.246-249)

It seems the Phaeacians are soft like we moderns, preferring the ‘’feast,” ‘’dancing,” ‘’hot baths and bed” to training and competing.

We learn from Homer’s heroes that although their vocation is one of warriorship they are also athletes who compete to demonstrate their character and excellence.

“Homer’s nobles are (or have been) warriors and athletes, competitors who demonstrate physical and moral excellence in public contests as a metaphor for war and leadership. Competition before spectators reveals a hero’s true character and establishes his worth.”  (Note: Donald G. Kyle, Sport and Spectacle in the Ancient World).