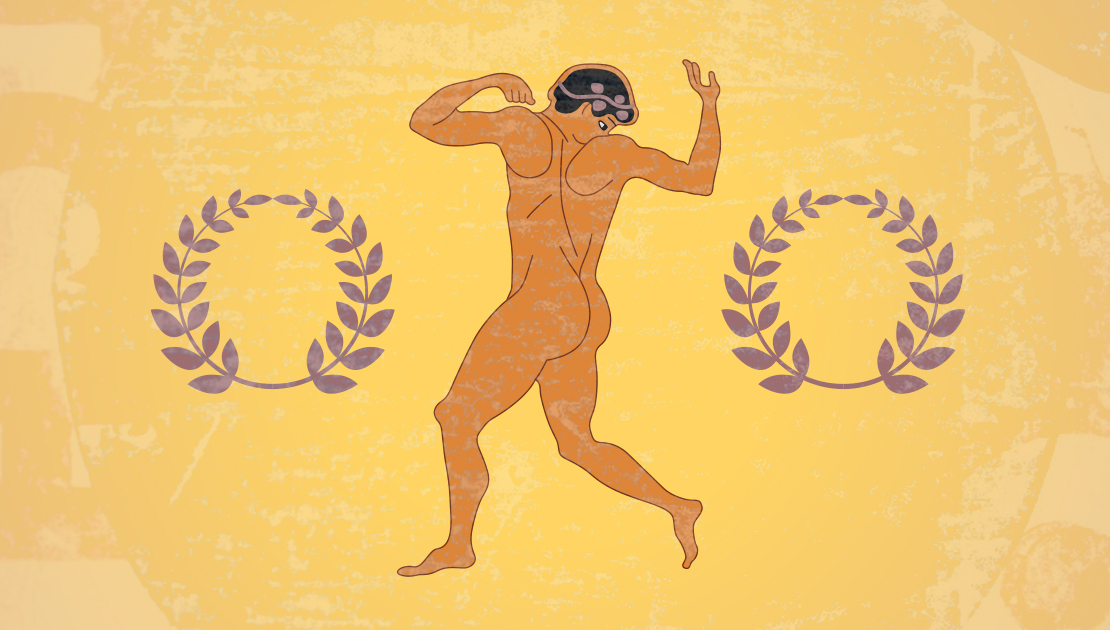 “The beauty of the body is something animal, if there is not any reason concealed behind it.” – Democritus of Abdera

“The beauty that an athletic body reflects through its muscularity, balance, harmony, and serenity are expressions of a soul which has tamed and trained its animalistic nature to serve the more noble commands of reason.” – Heather Reid

For the ancient Greeks exercise was more than just about aesthetics. The Greeks were unique in uniting physical beauty with moral goodness. They had a word to describe this physical moral ideal called kalokagathia.

In Plato’s dialogue Lysis Socrates is found at a gymnasium in Athens, specifically at the palaistra, the wrestling training area.

Taking Ktesippos along, I entered the palaistra. We found that the boys had performed the sacrifices already and that the sacred rites were playing knucklebones and all dressed to the nines… One of these was Lysis, who stood among the boys and young men wearing a garland on his head and had a
distinct appearance, worthy to be called not just beautiful but imbued with kalokagathia. (Note: Plato Lysis, translated in Ancient Greek Athletics; p 192).

Plato describes this young wrestler as having more than just physical beauty but “imbued” with kalokagathia The word literally means beautiful (kalós) and good or virtuous (agathós). It was a harmonious blend of physical, moral and spiritual virtues. The 20 th century German classicist Werner Jaeger (1888 – 1961) summarizes the word as “the chivalrous ideal of the complete human personality, harmonious in mind and body, foursquare in battle and speech, song and action.” (Note: (Jaeger, Werner (1945). Paideia, The Ideals of Greek Culture. Translated by Gilbert Highet. New York: Oxford University Press. P. 13.) While the British classicist Nigel Spivey explains the concept as the “joint nobility of appearance and conduct. “Beyond war, beyond sex, lay the peculiar but pervasive Classical Greek belief that beauty was invested with morality; that to look good was necessarily also to be good.”(Note: Spivey, Nigel. The Ancient Olympics (p. 57). Oxford University Press. Kindle Edition.). The Oxford don G. Lowes Dickinson (1862-1932) described in 1896 this Greek ideal as the ‘unique and perfect balance of body and soul’:

That sunny and frank intelligence, bathed, as it were, in the open air, a gracious blossom springing from the root of physical health, that unique and perfect balance of body and soul, passion and intellect, represent, against the brilliant setting of Athenian life, the highest achievement of the civilization of Greece. (Note: Dickinson, G. Lowes. The Greek View of Life (Routledge Revivals: Collected Works of G. Lowes Dickinson) (p. 163). Taylor and Francis. Kindle Edition.)

This was an ideal of balance and harmony. For Aristotle, these prized traits were depicted by the pentathlete. This was the ancient Greek athlete who competed in 5 (pente) different events in one day: foot race, javelin throw, discuss, long jump and wrestling. In his treatise on persuasion – called Rhetoric – Aristotle comments on physical beauty at different ages of a man’s life. For him, the ‘most beautiful’ was the pentathlete, who was naturally adapted to the physical efforts of the racecourse and bodily strength:

Beauty varies with each age. In a young man, it consists in possessing a body capable of enduring all efforts, either of the racecourse or of bodily strength, while he himself is pleasant to look upon and a sheer delight. This is why the athletes in the pentathlon are most beautiful, because they are naturally adapted for bodily exertion and for swiftness of foot. – Aristotle, Rhetoric 1361b11

Notice how the balanced physical characteristics of bodily exertion (strength) and swiftness of foot (speed) reflect ideal body shapes in modern athletes as well. Compare the bodies of sprinters and football wide receivers to marathon runners and cyclists. The former train to be strong and fast while the latter focus solely on endurance.

This ideal aesthetic-physical quality ultimately had a spiritual dimension for the Greeks. Here is how Heather Reid explains it: “The balance and harmony we see in artistic images of ancient athletes reflects not so much how the athletes really looked but was rather an expression of the desired state of their souls…When ancient Hellenes observed athletic beauty, they saw fit bodies but also a balance and harmony expressing an ideal state of the soul, which ultimately reflected their gods.” (Note: Reid, Heather. Olympic Philosophy: The Ideas and Ideals behind the Ancient and Modern Olympic Games (p. 167, 169). Parnassos Press – Fonte Aretusa. Kindle Edition).

Athletic, external beauty was a reflection of moral, internal beauty. In this ideal, the beauty of the athlete’s body was a product of the virtue of his soul. The soul (psychē, where we get our modern word for psychology), is a fundamental concept of ancient Greek thought and ethics.

The Greek Stoic philosopher Epictetus also educated his followers on the ideals of beauty, athletics, and the soul. To Epictetus, philosophy was a way of life, not just a theoretical exercise. In his most famous work, Discourses, he uses metaphors of exercise and competitive athletic contests to describe an ideal of self-beautification. He taught dispassionately controlling one’s desires and impressions was a way to seek the beautiful.

“Here is the true athlete, one who trains himself to confront such [tempting] impressions,” according to Epictetus. The training can include “all the practices that are applied to the body by those who are giving it exercise,” but only “if they’re directed in some way towards desire and aversion.” For Reid, the philosopher-sportswoman, this means “that philosophers, like athletes, become stronger by willingly subjecting ourselves to challenges: temptations, annoyances, and so on.” (Note: Reid, Heather. Olympic Philosophy: The Ideas and Ideals behind the Ancient and Modern Olympic Games (p. 193). Parnassos Press – Fonte Aretusa. Kindle Edition).

What advantage does a wrestler gain from his training partner? The greatest. And that man, too, who insults me becomes my training partner; he trains me in patience, in abstaining from anger, in remaining gentle. – Epictetus, Discourses 3.20.9

For Epictetus, and fellow Greeks, kalokagathia, resides in the soul:

Young man, you’re seeking the beautiful, and rightly so. Know, then, that it grows up in that part of you where you have your reason…your poor body is by nature nothing more than clay. – Epictetus, Discourses 4.11.25-27